Skip to content
Home > News > The Relational Universe in Practice

I recently completed a course called “Developing Relationship-Centred Practice”. During this course, we were introduced to different social pedagogical concepts. I would like to focus further on one of those concepts, as this one really resonated with me.

The concept of the “Relational Universe” is based on using the universe as a metaphor of someone’s relationships and support systems. It is linked to systems theory. Maclean and Harrison (2015) suggest that systems theory incorporates the forming of a web, or system. The person is connected to other people who can be family, friends and wider organisations. This system should sustain and enrich people. However, it is also recognised that someone’s support system can be placed under strain due to ever changing circumstances. 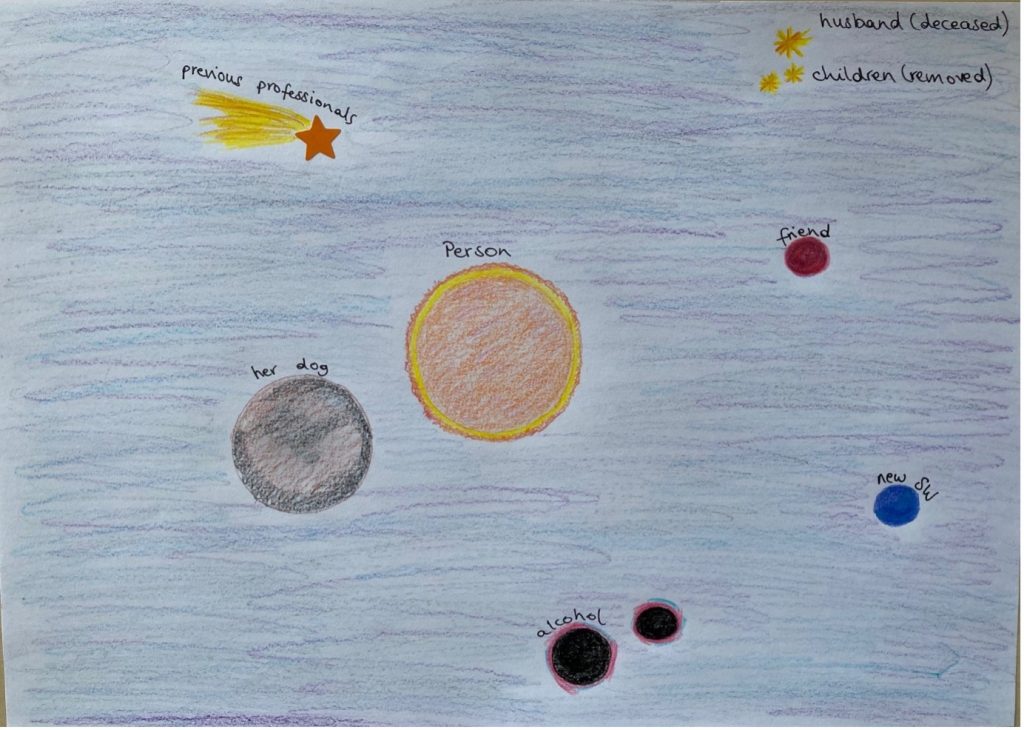 In Marie’s universe, I placed her at the centre as the glowing force in this. She can be fiery at times, but also she is naturally the central focal point. Marie lives on her own. Her husband passed away years ago, and their children were removed when they were young. I depicted them as stars in the distance. Whilst they are no longer physically there, they continue to shine for Marie in her memories. Marie’s most important factor in her life is her dog, which I drew close to her. A little further along in the constellation is her friend, who I imagined as a small red planet. The reason why I chose red, an alarming colour, is because her friend has her own issues, and she and Marie can negatively influence each other. They appear to have a symbiotic relationship (although it is not for me to judge this). Marie would have probably not chosen red to describe her friend! Further down in the universe, there are two black holes which represent the alcohol. They have a strong pull on Marie and influence her a lot. In the left hand corner we have a beautiful, sparkling and rare shooting star. The shooting star in Marie’s universe stands for previous professionals who were involved in her life, and there were lots of them! Initially they were keen to support her, but Marie finds it difficult to build and maintain relationships. She easily withdraws her engagement. So, these shooting stars appear in her life or “knock on her door” and, as quickly as they appear, they disappear again; if you blink you miss them. Shooting stars are seen as something amazing and rare, something you’re lucky to have seen. People make a wish and wait for it to come true. How many times did Marie wish for someone to come along and understand her? And I don’t mean: “Yeah, I totally get you. Let’s get you sorted!” No, what I mean is for professionals to use their empathy to fully explore Marie’s feelings and thoughts and her reasons for non-engagement with professionals. The new social worker is depicted as a small blue planet, almost blending into the background and sitting on the periphery for now, until Marie invites them to move closer into her universe’s constellation.

I found the concept of the “Relational Universe” extremely valuable in order to explore relationships. It really made think about how I perceive the relationships someone has, and how the person, in this case Marie, would view them. I have no doubt that she would have had a very different constellation of planets and forces if she would have drawn her own universe. As professionals, we sometimes want to feel as if we are the most important person in someone’s life, as we want to be the agents of change. However, looking at our own universe, do we perceive our GP or dentist to be a big influencing factor in our lives? Of course not, they are metaphorically on a different planet! This concept really helped me to analyse relationships more deeply, and it acts as a stark reminder of how privileged we are to be part of someone’s universe.

Nicole Ashworth is a Social Worker, ASYE and Student Lead at Middlesbrough Council